How to use the guide

Tips for a great family outing around Young People's Theatre

I scouted the surroundings of Young People's Theatre. Here are a few tips to make the most of your visit in the area before or after a show. (Revised May 21, 2015) 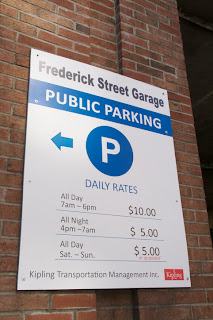 Best parking options
The YPT is located at 165 Front Street East, west of Sherbourne. Most parking lots around the theatre offer a $5 flat rate from 6 p.m. and on the weekends, but they can change prices at any time. (Just north of the Starbucks facing the theatre, in the same building, is the indoor Frederick Street Garage, usually offering such $5 flat rates from 4 p.m.)

Want them to burn off some energy?
Kids can sit still through a good show; you just need to wear them out first! You know your kids. If you feel they'd better enjoy the show after a stretch in the park, take them to David Crombie Park (a 5-minute walk). It is a long and narrow park including an inviting large climbing structure, a great mural, a fountain and plenty of space to run (see photos at the end of the blog). 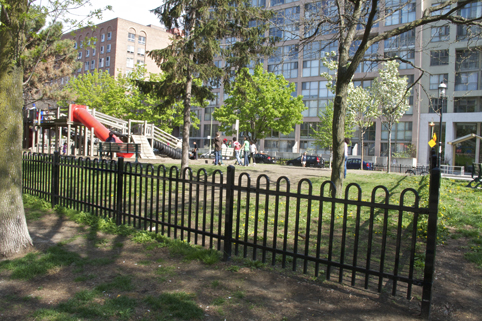 To get there from Frederick Street Garage, walk east on Front Street, along the theatre, then turn south on Sherbourne and left on The Esplanade. At the corner of Lower Sherbourne and The Esplanade, you'll find a line-up of places where you could grab some food to eat in the park, including a Subways facing the park. 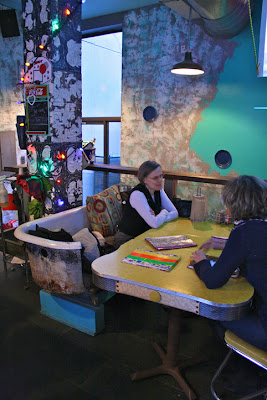 Want to take them to an exotic place?
Or, you could take your family to a truly whimsical mexican-food restaurant called Pacific Junction Hotel (no, it's not a hotel and it opens from 12 noon). Simply walk north from Frederick Street Garage and turn right on King Street. The restaurant is at 236 King East , just east of Sherbourne.

That's where you might have a chance to sit in a half-bath tub, play pool or ping-pong and try alligator meat tacos (tastes like chicken) or more traditional tacos and nachos. I've shared a large bowl of Mojito with my girlfriends there once, but that's another kind of outing isn't it? 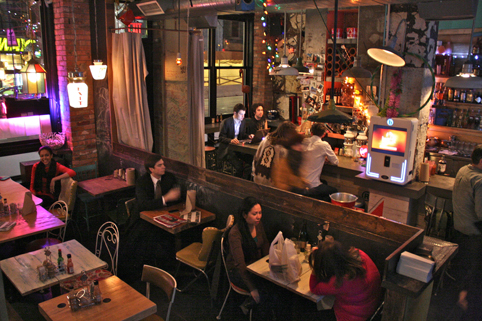 Posted by Nathalie Prezeau at 4:44 PM

Nathalie Prezeau
I am an ex-Montrealer who's played the tourist in Toronto for over 20 years and found enough fun and beauty here to fill three guides! Author/publisher of Toronto Urban Strolls 1 (which made the Globe and Mail's bestsellers list), Toronto Urban Strolls 2, and Toronto Fun Places, a 480-page guide for families in its 5th edition. See torontofunplaces.com and torontourbanstrolls.com.